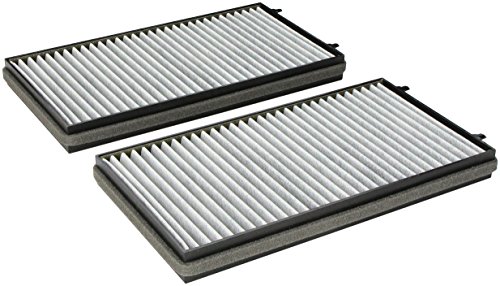 Bosch Premium Carbon Activated Cabin Air Filters absorb up to 100% of all pollen, dust particles and harmful substances. This results in a noticeable improvement in the air quality inside the vehicle. Bosch Carbon Activated Cabin Air Filters go one step further than Particulate Filters. Bosch Carbon Activated Cabin Air Filters have a 5-layer design that includes an additional carbon layer that absorbs toxic and foul-smelling gases such as ozone, nitrogen oxide, sulfur dioxide and hydrocarbons, and an additional cover layer for extra protection.Performance and durability are maximized by mold-resistant multi-layer media
1st Layer – Larger contaminant particles are captured by the non-woven pre-filter layer
2nd Layer – Elusive smaller particles are attracted and held by the electrostatically charged microfiber layer
3rd & 4th Layers – Non-woven cover layers adds stability to protect the microfiber layer from damage and acts as an additional barrier to harmful contaminants
Fits select BMW vehicles: 2002-2005 745i, 2002-2005 745Li, 2006-2009 750i, 2006-2009 750Li, 2004-2006 760i, 2003-2008 760Li; and 2004-2014 Rolls-Royce Phantom
Price: $50.65