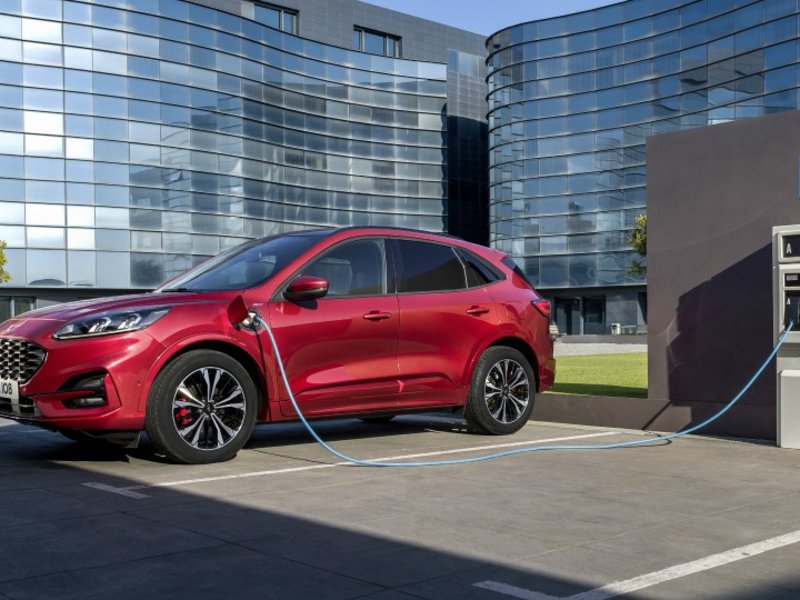 That would give them a market share of 3.1 percent and briefly help them overtake full-electric vehicles. LMC believes that by 2025 PHEV sales will top 1 million and take a 5.2 percent share.

The problem that automakers now have to deal with is that PHEVs are unavoidably costly, restricting their rollout.

“The plug-in hybrid is a very expensive technology so it makes sense on heavier, bigger, higher-CO2 vehicles where it does more for CO2 reduction and the premium is not as big as small cars,” Roelant de Waard, general manager for passenger vehicles at Ford of Europe, said at the launch of the new Kuga, which will offer a PHEV variant.

Fitting a battery, electric motor and the power electronics to an existing combustion-engine car adds about 5,000 euros, according to research from German engineering specialists FEV. The expense is such that a plug-in hybrid drivetrain with a battery big enough to reduce CO2 below 50g/km — the threshold automakers need to qualify for both EU supercredits and many local tax incentives –actually costs more than a drivetrain for a small electric car with a 32 kilowatt hour battery, FEV said.

Getting the consumer to shoulder the extra cost will be almost impossible, Bernstein analyst Max Warburton believes. Instead, he expects that automakers will have to absorb about 60 percent of the cost of the PHEV technology themselves to be able to sell the cars at the volume required to achieve the EU’s 2020-21 CO2 targets.

Automakers will have help from local incentives, ranging from purchase grants, company-car tax breaks and permission to drive in restricted low-emission zones. In those countries where incentives are generous, the cars will almost sell themselves.

“It’s not so much that we have to persuade buyers — in some countries the tax system will persuade them for us,” Ford’s de Waard said. He cited Germany, where the tax on PHEV company cars is half that of conventional cars, and France, which has a steep curve in CO2-based taxation that heavily penalizes large non-hybrid cars. De Waard predicts “a lot of demand” for Ford’s PHEVs from those two countries.

The danger is that incentives can be removed as quickly as they are applied. “Sales of PHEVs have been very volatile so far and they really depend on the governments’ support,” Kia Europe Chief Operating Officer Emilio Herrera told Automotive News Europe.

He cited two cases where local PHEV sales have collapsed. The first was the Netherlands, which was Europe’s leading market for PHEVs in 2015. Sales, however, fell fast after the government sharply cut generous company-car tax breaks. By 2017, sales had plummeted 96 percent compared with two years earlier.

The second case is the UK, which had risen to become Europe’s biggest market for PHEVs in 2018. But late last year the government removed a 2,500 pound (2,800 euro) purchase grant and as a consequence sales in the first eight months of this year fell 37 percent, compared with a rise of 93 percent for full-electric vehicles. The fall was also partly caused by automakers such as VW, BMW and Porsche removing many of their PHEVs from the market in the run up to the launch of WLTP standards.

There’s a risk of backlash against PHEVs if legislators discover that a large portion of government incentives are going to wealthy car buyers choosing premium SUVs fitted with the technology to gain access to low-emission zones or tax breaks, particularly if they’re suspicious they are not being re-charged.

The Netherlands has already put a cap of 50,000 euros on the list price for a full-electric vehicle to qualify for tax breaks. This led to a run on sales last year so frenzied that it helped make the Jaguar I-Pace full-electric SUV the country’s overall best-seller in December.

The PHEV has really taken off among users of premium cars. For example, 52 percent of Porsche Panamera’s European sales were plug-in hybrids in the first five months of the year. This happened despite a huge decline in sales for the car while Porsche worked to make it WLTP compliant.

All models are vulnerable to losing incentives if legislators do not believe they are being plugged in. The Dutch government abruptly removed PHEV incentives after an analysis of fuel-card data showed drivers were not re-charging them and just using them as normal hybrids. The UK government’s decision was partly made due to the Dutch data, according to one automaker source.

“People often get plug-in hybrids as a company car for which they get fuel paid on a fuel card, but they don’t get electricity paid so there’s no incentive to charge,” T&E’s Poliscanova said.

If the cars aren’t charged then the combination of a downsized gasoline engine propelling a vehicle made heavier by the addition of a battery and other components can mean emissions are much higher than a conventional diesel.

Polestar Reveals Pricing Details For Its Battery Electric Sedan. Are You Sitting Down?