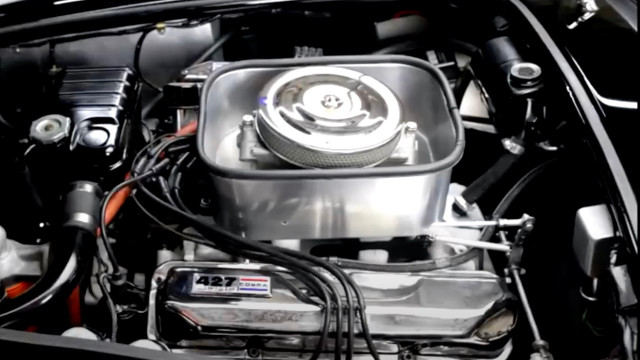 The Shelby Cobra is a common sight at car shows thanks to a burgeoning replica business, but original cars are exceedingly rare. The 1965 Shelby 427 Cobra featured on this episode of Jay Leno’s Garage is even rarer than most. It’s one of just 23 Competition models produced.

After Carroll Shelby achieved success installing a Ford V-8 in a lightweight British AC Ace chassis to create the Cobra, he upped the ante with the big-block 427 model. The bigger, more powerful engine required a redesigned chassis, and the bodywork was also modified with bigger fender flares and a gaping front intake.

Cobras used a “side-oiler” version of the Ford 427-cubic-inch V-8, so named because it had an oil passage running through the side of the block that directed oil to the crankshaft. Ford built a single-overhead cam version of this engine for NASCAR, but the Cobra used the pushrod version. Competition models had a single 4-barrel carburetor, and were officially rated at 425 horsepower when new. Jay says they may have been closer to 475 hp or even 500 hp. They also featured aluminum heads and an aluminum intake manifold, to save, weight, as well as bigger brakes.

As the name suggests, the Competition model was intended for racing, but Shelby wasn’t able to build enough cars by the April 1965 deadline for that year’s racing season. That left Shelby with a Cobra variant that wasn’t homologated for racing, but was too aggressive for street use. Ford was also no longer interested in supporting a Cobra racing program, as it had already gone all-in on the GT40.

Shelby began converting Competition models into slightly more civilized S/C models, but sales never picked up. That created a headache for Shelby, but it turned the Competition models into valuable collectibles. The car featured here is worth $2.5 million, according to Leno. Not bad for a car that cost about $8,000 or $9,000 new, according to Jay.

This Cobra also narrowly escaped California’s recent wildfires. After the fires encroached on its previous location, the car’s owner brought it to Leno’s Los Angeles-area garage for temporary storage.

That gave Leno the opportunity to drive it on the road, and it gives us the chance to hear the hairy 427 in action. It’s a loud, rumbling motor that somehow manages to idle well despite its racing intentions. Jay says driving the car is like driving a hand grenade and calls it “a lot of fun.”

Check out the video above for more on this incredibly rare and incredibly valuable Cobra.