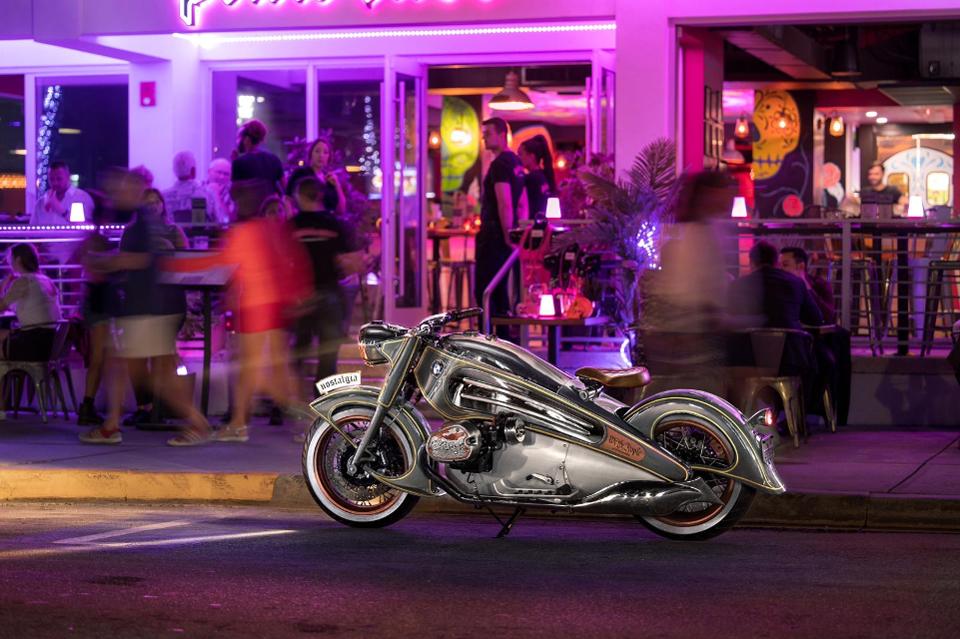 “A client who purchased one of our Nostalgia bikes returned a month later and asked if we could build something special that nobody else could have,” says Alex Niznik, CEO and founder of NMOTO, a firm that two years ago successfully launched its Nostalgia, a lovingly crafted tribute to the 1934 BMW R7, an Art Deco masterpiece that was lost to the world for more than 70 years. NMOTO’s Nostalgia is based on the chassis and running gear of a current BMW R Nine T motorcycle yet captures the spirit and sweeping elegance of the original R7.

“At first, he wanted Titanium panels, but I told him Titanium is difficult to work with,” says Niznik. “He then suggested platinum with pink gold trim.”

Fortunately, not long before this commission, Niznik had hired custom motorcycle designer, inventor and engineer Christian Travert. A French expat living in Florida, Travert is known to a narrow spectrum of motorcycle enthusiasts for building the Y2K, a long-wheelbase superbike powered by nothing less than a turbine lifted from a Bell Ranger helicopter. Jay Leno added a Y2K to his most eclectic of all collections. In 2003 Travert merged his company with defense contractor Labock and is credited with design of the Rhino Runner, a built-to-order armored bus used to shuttle diplomats and even Defense Secretary Donald Rumsfeld to and from the “Emerald City” in Baghdad. To say the least, Travert is skilled and inventive.

After Travert defined the challenges of elevating hand-formed alloy panels to the quality of fine jewelry, an effort requiring nearly five times as many hours of hand labor, Niznik “asked the customer if we could build a limited edition of no more than ten…if he gets Number One. He understood that a limited run would make his bike worth more,” says Niznik. It would also contain costs, as a one-off two-wheeled piece of jewelry might have proven prohibitively expensive.

With this limited run, Nostalgia is evolving an atelier capability. Each owner can personalize elements like the leather, gauges, timepiece, and the unique engraving of the cylinder covers and other panels. Those commissioning a bike are encouraged to let imagination run wild. Motorcycles are far simpler than automobiles, but potential customers should understand they’re commissioning a piece of jewelry.

“We offer customization of the engine covers,” says Niznik. “On the first we show Mt. Rushmore, but each client can choose what he wants engraved.”

“The two engine covers are created with 3d machining from a block of aluminum,” says Travert. The billet alloy machined piece is dense enough to protect the gold inlay from engine heat.

Travert has developed unique plating baths, merging the techniques of jewelry with concours-quality chrome plating. “It is far more expensive to do than chrome. For jewelry, the bath is maybe 10 inches in length. Here, we needed far more capacity,” says Travert.

But the primary challenge is achieving absolutely flawless surface finish on the large aluminum body panels. “The shape of the panels had to be perfect,” says Travert. “The hand-shaping of the material had to be pristine before going to the plating process.”

The plating process will be familiar to anyone who has commissioned restoration of a vintage or classic vehicle with chrome trim. “We plate with three layers. Copper, nickel and then platinum,” says Christian. “Copper is the foundation. With each step in plating, we must re-polish. There can be no imperfection. It’s a complicated and very long process. The number one challenge was polishing the panel many times,” says Travert. “There is nothing worse than a neon light going onto a shape and showing imperfection.”

“When we paint panels for a Nostalgia, the panels are very close to perfect, but the primer and paint cover any extremely minor imperfections.” To plate with material like platinum, “you must make the aluminum like a piece of glass. The work is way more intensive.” Paint covers up many flaws—ask any engineer in the car business about the value of metallic paints to hide minor panel imperfections.

“It was not a goal to make the bike this way, but this is how it worked out,” says Niznik, who has a classic roll-with-it entrepreneurial approach. This project forces NMOTO into the early stages of atelier work that may potentially lead to the sort of real jewelry inlay like one sees in Rolls-Royce interior panels. With the addition of Travert, who has an untamed inventive streak, combining the skills of an engineer with the crazy soul of an artist, Niznik’s little concern will not be a one-hit wonder, but instead can develop other specialty bikes to attract collectors.

“We added the suicide hand shifter like the original R7 had, and a kick starter,’ says Niznik. “You have a choice between conventional shift or hand shift, and also kick start or press the button.”

The commissioning customer rides his first Nostalgia. This bike is most likely destined for display in the Man Cave and occasional forays on tree-lined roads near grassy concours fields. Genesis of this project? Apparently, the customer is twice blessed: a beautiful girlfriend who also loves riding motorcycles. A man needs motivation.

“We have two kinds of buyers,” says Niznik. “The motorcycle buyer who rides, and the art buyer, the guy buying a piece of art to display.” Best of all, the customer already has Niznik and Travert sorting out other special commissions for his collection, though Niznik is tight-lipped about what they might be.