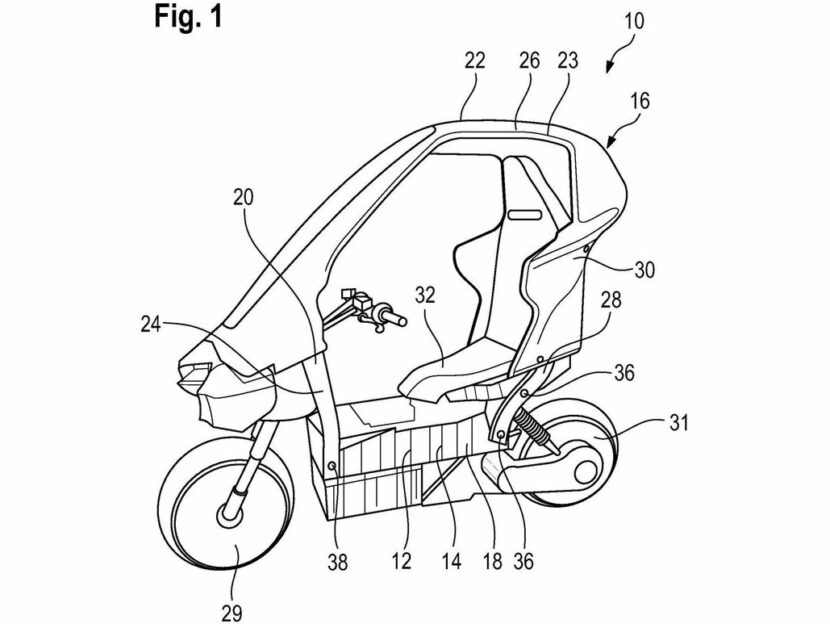 BMW has apparently filed a patent for a new breed of scooter. The German car maker has been making motorcycles for longer than it was involved in car production. Certainly that experience turned it into a respected name in the business. BMW has also made various scooters over the years, the most modern one being the electric being the C Evolution model.

But the electric seems to be a thing of the past right now, as BMW is looking for a more revolutionary approach. According to Cycle World, BMW filed for a patent recently, the images submitted pointing to a sort of convertible model, that can be used with or without a sort of roof.

On top of that, the new scooter seems to be sporting some serious safety features to keep the rider safe and they would be needed, especially with the roof up. That’s because powerful lateral gusts of wind could tip you over when you’re riding on just two wheels and have an increased area to act as a sail, against you. BMW has a solution for that though.

Furthermore, the patent seems to point out to some sort of active aerodynamics. Basically, it comes with four movable small wings, two at the front and two at the back. They are connected to the scooter’s ECU and are controlled accordingly to create downforce. Additionally, the computer can adjust them to tilt the scooter and counterbalance the scooter against side winds. That’s not all though.

It looks like side airbags are also included in the mix, as well as rear impact protection and crumple zones. The roof itself is detachable and made of carbon fiber. As a matter of fact, the entire scooter is built to be as light as possible, to compensate for the heavy batteries, as it is, of course, electric.

Since that’s the case, it feels like a combination between the C Evolution scooter and the original C1 which was also meant to be a very safe model with a safety cell for the rider. Unfortunately, it was too heavy and its 15 HP engine could barely cope with the weight it had to carry around. Hopefully, with the carbon fiber roof and aluminum chassis, the new model will rise to the expectations.

Five Important Facts You Should Know About the 2021 BMW M3