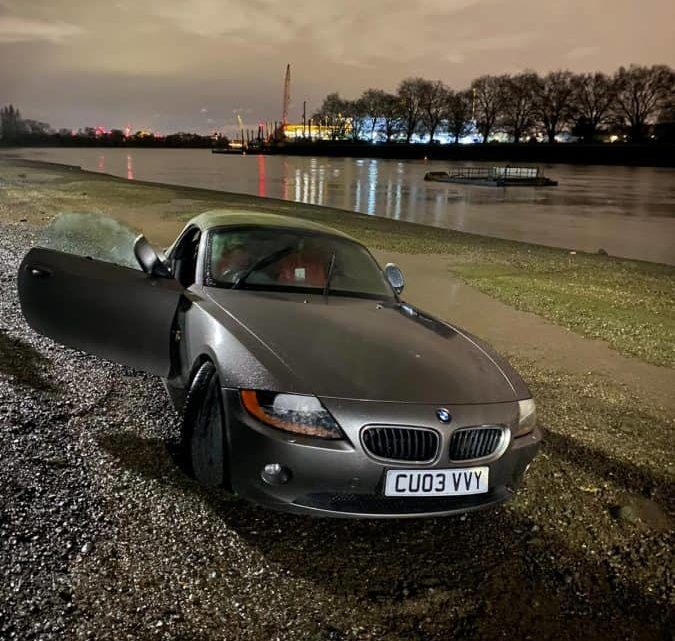 A BMW owner watched helpless as his prized car he had parked by the Thames was swept away by a freak tidal surge following heavy rain.

James Roycroft-Davis, a 25-year-old business owner, could only watch aghast as his BMW Z4 floated away.

He managed to recover it later that day but says the car is a “total write-off”.

James said he had visited Putney in southwest London on Wednesday to see his girlfriend at about 2pm, and came back to where he parked the car around 4.30pm to find it missing.

He said: “When I came back it was high tide, a couple of blokes were laughing, saying, ‘see that car floating down the Thames’, and I went, ‘oh wait that’s my car’.

“There was not much we could do. We thought, let’s see where it sinks. It sank about 50 metres away.

“We had to wait until about 11pm when it was low tide to try and retrieve it.

“It is a total write-off. We are hoping the insurers will pay out but we doubt they will.”

Also in the car that he paid £5,000 for was a Barbour jacket, a jumper from Topman, and Asics running shoes – all costing about £200.

He said: “I actually bought the insurance the day before yesterday. It was a complete coincidence – it’s definitely not an insurance scam.

“There has been a lot of people taking pictures as it floated down the river. It is quite funny.”

Storm Ciara brought a month and a half’s rainfall in just 24 hours in some areas of the county while 97mph winds and flooding left more than 20,000 people without power.

Further downpours are also expected for Storm Dennis, with 35 flood warnings in place.